As questions continue to swirl around the city regarding the name of Fred Douglas Park, more steps have been taken to support an official change.

The Metro Council approved a resolution Tuesday asking the Metro Parks board to rename the 7-acre space in East Nashville to Frederick Douglass Park. The move would restore what is believed to be the originally intended name of the park honoring Douglass, an abolitionist born into slavery in 1818 who later escaped to freedom and rose to prominence as an orator, author and champion of human rights.

The resolution was sponsored by council members Scott Davis, who represents the neighborhood where the park is located; Angie Henderson of Forest Hills; and at-large member Bob Mendes.

The Metropolitan Board of Parks and Recreation policy manual explicitly states: “No park once named may ever be changed.”

Metro Parks Director Tommy Lynch addressed this at a parks meeting in early February, telling the board of directors: “I think we owe the city of Nashville the due diligence to look into this and to investigate. This would not be a renaming of the park, but it would be the correct naming of the park.”

The name clarification will be on the Metro Parks agenda March 7. 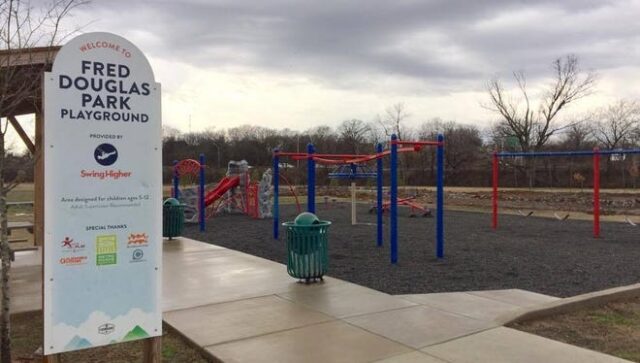 The parks policy also says: “The Parks Board can initiate the naming process whenever deemed necessary and/or in the best interest of the City.”

The group’s criteria used in “determining the appropriateness” of the naming designation include:

There is no evidence of a famed Fred Douglas (with one S) identified in Nashville history for which the park may have been named. “There is no ‘Fred Douglas’ living in Nashville listed in the Nashville City Directory in the 1930s,” the resolution states. And no family members of a Fred Douglas have come forward to say otherwise.

However, documents continue to surface supporting the notion that the park was intended to be named for Frederick Douglass.

“It’s convincing evidence,” historian David Ewing said a few weeks ago in an interview with The Tennessean.

There is another piece about the “dedication” of the park, which also ran in The Tennessean. It references “more than 1,000 Negroes assembled for the dedication of Fred Douglass Park for Negroes in East Nashville.”

Oddly, this piece published in the newspaper on July 5, 1938 — more than two years after the mention in 1936. And, to further confuse the issue, it uses the shorter first name “Fred.” But it also spells “Douglass” with the double S, just as Frederick Douglass did.

Additional evidence suggests that naming the park “Fred Douglas” may have been an intentional misspelling to detract from the honor bestowed upon a prominent African-American civil rights advocate. An examination of decades-old board minutes showed “some scribbling around the name” of the park and Douglas written with one S, according to Lynch.

Frederick Douglass made multiple appearances in Nashville, including a visit to Fisk University in 1873 when he spoke with students and viewed the foundation of Jubilee Hall under construction. He also visited the Tennessee state Capitol and met with Gov. John C. Brown, toured the business section of the city, and visited the tomb of President James K. Polk.

A few day later, he delivered an address at the Third Annual Fair of the Tennessee Colored Agricultural and Mechanical Association, a speech now archived by the Library of Congress. In it, he referred to Nashville as a “city famous for its elegance and refinement, and the scene of so many thrilling events and patriotic associations during the late struggle for Union and liberty.”

A 1917 article in the Nashville Globe describes a gathering at Lea Avenue Church to celebrate Douglass’ birthday. It also mentions a speech by the Honorable J.C. Napier — a Nashville attorney who was ex-register of the U.S. Treasury and president of the National Negro Business League — that lauded the “hearty reception by the citizens of the city” during Douglass’ visits to Nashville.

In the article, Douglass is often referred to as “Fred,” and, in the headline, the second S is left off his last name.

“Under the historic circumstances summarized above, the evident confusion, and the merits of fully commemorating the contributions to history made by Frederick Douglass,” the resolution states, “it is fitting and proper that the name Fred Douglas Park be corrected and/or restored to ‘Frederick Douglass Park.’ “