He talked of arrests and sit-ins and civil rights marches and beatings and death.

And then a piece of his history — long since filed away in a windowless room in the Metro Nashville Police Department — was brought out and put in front of him.

And, after nearly an hour of powerful discourse, Lewis was left speechless.

In front of him were mugshots of a younger Lewis. There he was, just a day before his 21st birthday, wearing his iconic tan trenchcoat, eyebrows raised and lips slightly parted in bemusement. And another, one year later, wearing a suit and tie with furrowed brow and tight lips.

They stated his full name: John Robert Lewis. His height: 5 feet 5 inches. His color: Negro. The reasons for his arrests: Disorderly conduct. Breach of the peace. Resisting arrest.

A civil rights pioneer and a Presidential Medal of Freedom recipient, Lewis was a leader in Nashville’s nonviolent, student-led sit-in movement in the 1960s. He went on to participate in the Freedom Rides, and speak at the March on Washington, and be beaten on the bridge at Selma.

Lewis came to Nashville this weekend to deliver a talk about those experiences to a packed auditorium at Martin Luther King Jr. Academic Magnet high school and to receive the Nashville Public Library Foundation’s Literary Award. The honor was given to the congressman for the powerful sentiments in his best-selling graphic novel trilogy “March,” which depicts the humiliation, brutality and enduring fortitude of the civil rights movement.

But, in the unearthing of the mugshots, he got much more.

“I was surprised and almost cried,” Lewis said later. “I held back tears, because I was so young.

“I had all of my hair and a few pounds lighter,” he chuckled. “And look at me now.”

The photos will go on display in the Civil Rights Room at the Nashville Public Library. It wasn’t until recently that they were uncovered. It turned out that Nashville Police Chief Steve Anderson had pulled Lewis’ file as a teaching tool for new police recruits, who attend social justice training in the Civil Rights room. But the negatives remained tucked away in a folder.

Then local attorney and historian David Ewing — a man known for uncovering the cool and quirky items of Nashville history — inquired about the mug shots of Lewis. It wasn’t the first time Ewing sought them. In fact, he had inquired about the photos off and on for 15 years. This time, he was directed to the recently uncovered file. In the records room at the police department just this Monday, he pulled out a small manila folder containing copies of the photos.

On Saturday, Nashville Mayor Megan Barry revealed the historic finds to Lewis in front of the packed crowd.

Later, after having a moment to take in the significance of the photos, Lewis said he would love to have copies to put in his office in Washington D.C., so when young people come by they will see what happened and be inspired to do something.

Hundreds filled the seats at MLK Magnet — with extra chairs lining the aisles and at least a hundred more unable to get in — to be inspired by Lewis. He was met by a standing ovation before he even began to speak.

Walking slowly and deliberately across the auditorium stage, he started with the story of a young boy — the son of a sharecropper, the grandson of a slave — who preached to the chickens on his family’s farm.

“Some of the chickens would bow their heads, but they never quite said ‘Amen,’” Lewis recalled. “They tended to listen to me better than some of my colleagues in congress.”

He talked about being a grade school student and first hearing of Rosa Parks and Martin Luther King Jr.. He told of writing to King and being invited to join him in his movement for equal rights.

Lewis’ first arrests came in Nashville. This city is where he grew up, coming here at age 17 to attend what is now American Baptist College and Fisk University. And he attributes the Nashville academic and religious communities with shaping him into the civil rights leader he became.

“The first time I got arrested in this city I felt free,” Lewis said. “… I have not looked back since.”

He is still looking forward.

Before he left the stage, with poignant moments too many to count, Lewis addressed the young people in the crowd. He implored them to continue to movement started by Parks, King and the civil rights leaders before them.

“You have a moral obligation, a mission and a mandate to stand up to speak out,” Lewis said. “We need your energy, your commitment, the dedication of our youth to lead us to a better place. We need you now more than ever before. … We need you to lead us again. You can do it.” 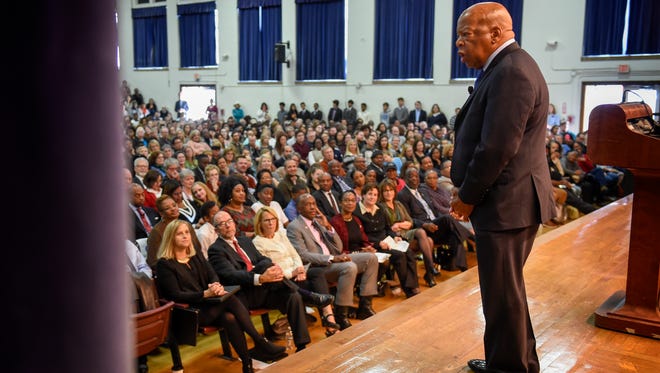