PBS – How did Charley Pride become a country music star? Here are six of his career milestones.

This month, America lost one of its great voices — one that broke barriers, record sales, and challenged genre standards, to forever alter the landscape of country music. Charley Pride was a man of many talents who started out in the world of baseball. But when his pitching arm eventually turned to the guitar in order to accompany his rich baritone vocals, Pride set off on his inevitable path to become the first Black superstar of country music. As fellow entertainer Whoopi Goldberg said of the late icon: “He is Americana personified. He is exactly what an American Master should be.”

Over the course of his career, which spanned 50 years, Pride sold tens of millions of records worldwide, had more than 52 top 10 country hits, and 29 number one records. He also received the Academy of Country Music’s Pioneer Award, a Trumpet Award, was inducted into the Grand Ole Opry and the Hollywood Walk of Fame, and won four Grammy awards, including a Lifetime Achievement Award. But the journey wasn’t always smooth. It was also punctuated with unexpected difficulties, diversions and lucky accidents. Here are a few lesser known facts about the life of this musical icon.

He used baseball to pull himself out of poverty.

Born in 1934, Pride was raised among a family of 11 children in the Southern town of Sledge, Mississippi. His parents were cotton pickers, and as a boy he would work long days alongside them in the unrelentingly hot fields.

In 1947, before he even thought of a career in music, Pride was mostly only interested in playing baseball. The legendary Jackie Robinson had made history in 1947 when he became the first Black player in the major leagues, and Pride wanted to follow in those footsteps.

“When Jackie Robinson went to the major leagues, I was picking cotton beside my Dad and I said to myself — I said, ‘here is my way out of the cotton field’,” Pride recalled.

Pride made his debut at the Iowa State League in 1952, then moved up to pitcher-outfielder for the Memphis Red Sox in the Negro American League, and from there he joined the Yankees’ Class C team in Boise, Idaho. In 1956, he returned to Memphis where he made the All-Star team.

He was drafted into the military.

Pride was still chasing his baseball career in Memphis when was drafted in 1956 and sent to Fort Chaffee, Arkansas for basic training. After training, he was stationed at Fort Carson, Colorado, where he cultivated both his athletic and musical abilities. He played for the Fort’s baseball team and also spent nights singing and entertaining troops at the Officers’ Club. Pride was released from the military 14 months later, having never deployed.

His landlady got him his first gig.

In the early ’60s, Pride moved to Montana with an eye to play in the minor leagues there. But those hopes were short lived. He was cut after playing just four games with the Missoula Timberjacks.

Pride wound up working in a smelting plant where they had a semi-professional baseball team that he was able to play in. After games, the team would hang out at local bars, and Pride’s coworkers would encourage him to play the guitar and sing songs. It was around this time that, “his landlady hears him singing and thinks, ‘You’re really talented, singing between innings,’ and so she gets him his first gig at a Helena, Montana nightclub,” according to Nashville historian David Ewing.

He beat segregation and racism to get to the top.

Pride’s eventual rise to stardom would happen amid the backdrop of segregation, rising racial tensions, and the Civil Rights Movement and the assassination of its icons, including Dr. Martin Luther King, Jr.

When Pride first started knocking on the doors of producers and music labels in Nashville hoping to break into country music, there weren’t many African Americans on the scene. But through sheer determination and an uncanny ability to network, Pride managed to sign with RCA records. When the label released Pride’s first single, they sent it to DJs across the country without the standard promotional photo and biography — they were worried that stations would be skeptical about putting a Black artist on the airwaves.

“I was a disc jockey in Mobile, Alabama and we had gotten some rumors that we were gonna get a record from a Black guy that sang country music,” recalled radio host Charlie Monk. “We didn’t have any records from Black guys and so the fact that there simply was no knowledge, there was no mass communications, there was no video, there was no pictures.”

He got the kiss of approval from Willie Nelson.

In the early stages of Pride’s career, there were some key supporters who championed him and his music. One of them was country superstar Willie Nelson, who knew the importance of showing solidarity for his fellow musician in the very segregated South. During a performance in front of a packed audience at The Big D Jamboree in Dallas, Willie Nelson kissed Pride right on the mouth. It was one of a number of endorsements and shows of support from Pride’s fellow musicians that helped him quickly win over his mostly white country music audience.

“It’s Willie’s way of saying, ‘if I’m kissing him on the lips you’ve gotta be okay with listening to him’,” said country star Neal McCoy of the incident.

Years later, at the start of an interview with Nelson on his tour bus in 2018, Pride kissed him right back on the lips, saying “I got you back. I’ve been wanting to do that for so many years.”

He deeply admired Dolly Parton and the feeling was mutual.

Pride and Parton shared a mutual respect for each other that stemmed from certain similarities in personality and outlook. “Over the years, I’ve just admired her so much. She’s a songwriter, businesswoman — I mean the whole bit,” said Pride. “And like I say on stage; and she’s rich too!”

“I knew he grew up as a country boy and I knew that we talked a lot about our upbringing about how poor we were fetching water and growing our own food and having to raise the food,” Parton said.

Both musicians were also deeply religious. The pair discussed their faith together, but didn’t believe they had “to cram it down somebody else’s throat,” said Parton.

It was actually Pride’s wife that finally initiated a musical collaboration between the two. Rozene called Parton one day to say that her husband loved her song “God’s Coloring Book,” Parton recalled. Pride later asked her if she would let him record it, to which she responded, “Only if you let me sing it with you.” 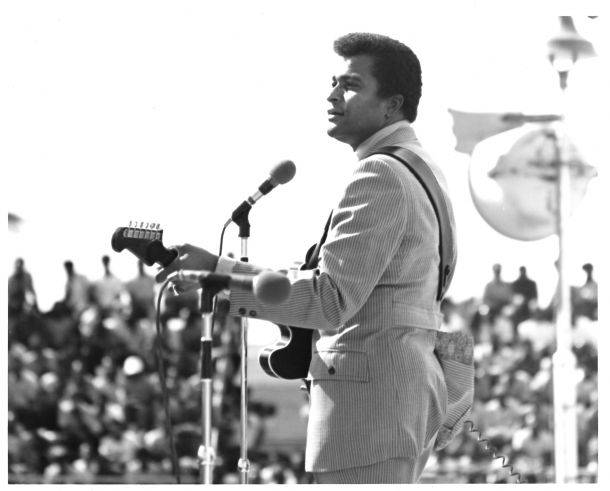