If the walls in Nashville could, they would sing.

Take AJ’s Good Time Bar, for instance. The three-story honkytonk with a rooftop bar located on Lower Broadway was voted the No. 1 honkytonk in Nashville by Billboard Magazine. From noon to night, the live music fills the air and the walls pay tribute to Alan Jackson’s career and life with photos, records and instruments. AJ’s Good Time Bar is just a block away from the Country Music Hall of Fame, where its founder and owner was inducted into last year.

This exciting venue isn’t the building’s first, however. It is located in a section of the oldest building on Broadway, which was built in 1862 and used as a hospital in the Civil War. Music has played a big part of the history of AJ’s Goodtime Bar building, too. In 1941, decades before Alan Jackson’s smash hit paying homage to traditional country “Don’t Rock The Jukebox” was a chart-topping song, the building was home to a local jukebox company. A chance meeting outside the music store was the start of the South’s first independent record label and the South’s first vinyl record pressing plant.

In 1946, standing outside what is now AJ’s Goodtime Bar, Jim Bulleit ran into a local musician who encouraged him to start a record label. 421 Broadway became the headquarters of Bullet Records, which signed a big band leader from the Hermitage Hotel whose nightly shows were popular among guests and locals. Bullet Records artist Francis Craig’s “Near You” became Music City’s first record to sell more than a million records and remain a No. 1 on the Billboard charts for 17 weeks.

Record plants could not keep up with the huge demand for “Near You,” so Bullet Records started its own record-making plant in Nashville, the first in the Southeast. In its brief history from 1946 to 1954, Bullet released the first record from Owen Bradley—also known as the “Father of Music Row”—with B.B. King in 1949. Today, Bullet Records’ plant is now United Record Pressing, and is the largest record pressing plant in North American producing more than 60,000 records a day, more than half the number of vinyl records made in America.

Craig wasn’t the only hit sensation connected to the Hermitage Hotel, either. Nashville’s oldest and grandest hotel has hosted inside its walls presidents, musicians, professional athletes and visitors from all over the world. The striking Beaux Arts style welcomes visitors to the famous lobby with a painted glass skylight, marble floors and columns. 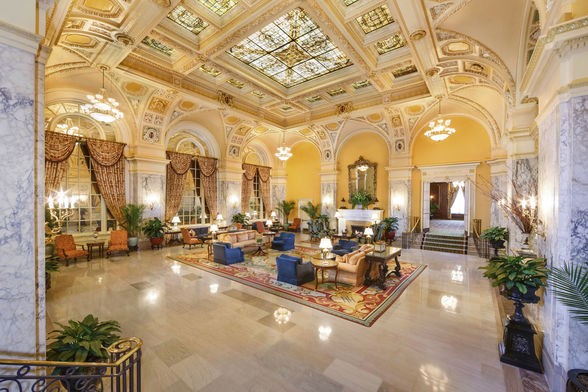 The hidden history doesn’t stop there. On the lower level of the hotel, just past the famed Capitol Grille and Oak Bar, is a door leading to one of the city’s most interesting room. With bright green and black glass tile walls and striking terrazzo floors, the restroom is one of Nashville’s finest Art Deco designs. In fact, women are invited to see the historic bathroom’s original mint green sinks and toilets.

Legend has it that John F. Kennedy had his shoes shined in the restroom while a guest of the Hermitage Hotel. Musicians Alan Jackson and Jack White have both done photo shoots in these walls.

Woolworth on 5th is a place where great food is merged with history and Southern culture. Nashville was the second city in America where the non-violent lunch counter sit-ins challenged the once-segregated eating establishments. The walls of city’s first Woolworth five and dime saw justice due to the actions of brave Nashville college students. On February 27, 1960 students peacefully sat at the lunch counter, were refused service and later beat by an angry mob. Police arrested the protestors, including a young John Lewis, his first arrest in protesting the segregation of the South. While being led out of the drug store, Lewis and the students sang “We Shall Overcome,” which would later become the anthem of the Civil Rights Movement. Because of the actions of the students, Woolworth’s and all other lunch counters in Nashville became open to everyone. A lunch counter still part of the experience today.

No tour of Nashville history is complete without a visit to Skull’s Rainbow Room, Printer’s Alley most historic and unique establishment, tucked in the basement of the 19th century Southern Turf Building. When the Turf open in 1895, it was a saloon, brothel and gambling hall during the wild days when the area of Printers Alley was called “The Gentleman’s Quarter.”

The Rainbow Room opened in 1944 and became famous when Skull Shulman later moved it to Printers Alley, replaced the orchestra music with live music of the day and brought in burlesque dancers to entertain locals and visitors.

Shortly after, The Turf was leased to The Tennessean newspaper. The walls of Skull’s were where the presses once hummed late at night printing thousands of papers covering the lives of leaders, politicians and events of Nashville. Today, Skull’s serves up handcrafted drinks, good food and live jazz music nightly as well as burlesque shows every weekend.

If you make a visit to these Music City institutions, listen closely—the walls still hum with hidden history.

next
The Nashville Scene: WRITERS-CHOICE

How Nashville became the IT City
2 HOURS