NASHVILLE, Tenn. (Feb. 20, 2020) – Corps employees got a taste of Nashville’s black history today during a tour and lunch at Woolworth’s on Fifth Avenue.

Sixty years ago on Feb. 13, African American students from area colleges began a series of sit-ins at public lunch counters in Nashville to fight for the right to sit at the same tables as white students.

“The civil rights room and the walk to Woolworth’s really enlightened me on the significant events that affected Nashville and the power of people when we come together for common good,” said Calandra Wilson, Equal Employment Opportunity specialist and Special Emphasis Programs manager.

Wilson and the group of Nashville District employees walked three blocks from the district headquarters on 8th Avenue to the Nashville Library Civil Rights Room for a tour led by David Ewing, a lawyer and one of the city’s most popular historians and guides.

Inside the civil rights room, he told the group stories about the work of John Lewis and Diane Nash. He explained their roles as prolific leaders around the country, specifically in the Nashville, and encouraged everyone to do a better job of preserving their history so the stories about black history will not be forgotten.

“He’s a fascinating historian and this is some cool information,” said Civil Engineer Jamie Nabakowski. “I’ve heard stories from when I was in high school about the sit-ins but never had the opportunity to hear it quite like this. This is great, just great.”

Ewing also shared insight about how the movement affected areas around Nashville that spurred future changes around downtown, work on the Cumberland River, the First Baptist Church, Capitol Hill and Edge Hill areas.

The living history lesson continued as the group walked a block over to Woolworth’s on Fifth, and on the second floor to one of the several lunch counters in Nashville where African American students staged a series of peaceful protests.

Engineering Technician Emory Perkins, sat in a lunch counter chair that John Lewis sat in on the mezzanine level where a previous counter was located and took photos that he will show his children.

“This was absolutely great,” said Perkins. “It has me wanting to learn more about history, the Woolworth story, and I sat sit in the chairs that John Lewis sat in, and through his sacrifice we have the opportunity to share a meal with friends together.”

Sitting at the lunch counter at Woolworth’s where blacks and whites were segregated gave Corps employees the chance to realize the importance of the movement for equality a half a century ago.

“It’s a perfect experience that goes in conjunction with Black History Month,” said Wilson. “Our goal was to simply learn more about Nashville’s history, encourage participation throughout the district as part of our support and celebration of Black History Month and I think we accomplished that.”

Ewing said that exposing everyone to history through experience rather than simply through text books, enables everyone to better remember what they’ve learned.

“The expectation is that through our conversations, tour of the civil rights room and trip to Woolworth helps to reflect on our own role in making the world a better place,” said Wilson.

Project Manager Connie Flatt said she loved seeing the Woolworth building and was happy to be a part of the tour.

After a tour of Woolworth’s the group ate lunch, spent time asking Ewing questions, and learned about Nashville’s pivotal role in the movement and history.

“I think they have a better understanding that they now are able to sit here as a diverse group of people, to eat and enjoy, because of the courage that people showed,” said Ewing.

Lyndon Owens, supply tech, said he appreciates the sacrifice that Civil Rights leaders made to ensure he has the right to sit in Woolworth.

Wilson said Black History Month is an important opportunity to celebrate diversity within the Corps, and a way to inform all people of the contributions and rich history of African Americans. 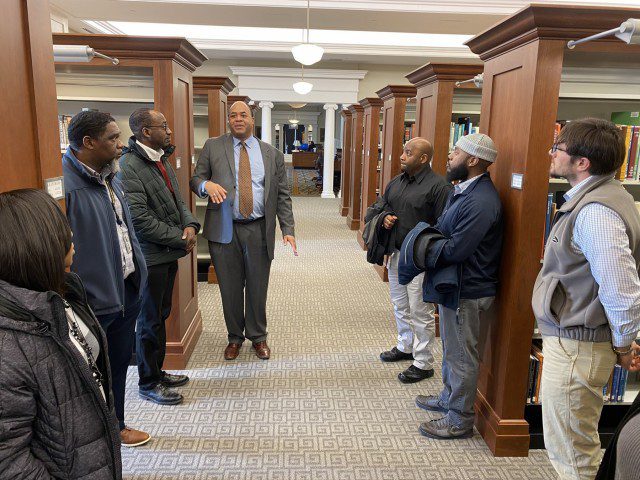