A nearly forgotten chapter of local history has inspired a unique immersive work that has pulled together some of Nashville’s most notable artists.

The crash, which occurred on the morning of July 9, 1918, claimed the lives of at least 101 people – mostly African Americans, who were forced to ride in shabby “Jim Crow” wooden cars near the front of the train.

“Growing up in Nashville, I’ve probably passed Dutchman’s Curve thousands of times,” says Jessika Malone, Actors Bridge Associate Artistic Director and director/producer of “Haunted.” “But I had no idea that the deadliest train crash in American history had occurred so near the center of my life. Beyond the horrific details of the incident itself, I was almost more disturbed by the fact that I knew nothing about it.”

In fact, most Nashvillians aren’t aware of the tragedy, says David Ewing, a respected Nashville historian and consultant on the “Haunted” project.

“It was almost a perfect storm of circumstances,” Ewing says. “Dutchman’s Curve was a dangerous horseshoe bend in the tracks, which had already been the site of another accident. Both trains were running late, so they collided going full speed – and coming around that curve, they never saw each other. But the real tragedy was that under Plessy vs. Ferguson, the railroad could put people in different cars based on their race. The African Americans rode in inferior wooden cars from the Civil War era, whereas the white passengers rode in new steel cars, farther back from the exhaust and heat of the steam locomotive engine. The impact caused the wooden cars to telescope into one another, splintering and catching fire.

“So many lost their lives that day,” says Ewing, who hopes to commemorate the 100th anniversary of the crash next year with a special memorial. “And although we did not properly memorialize them at that time, I hope that ‘Haunted’ – with its unique creative response – can give them voice and honor their stories.”

But how to tell such a dark and harrowing story? Malone began reaching out to other artists – including abrasive Media and the contemporary dance company FALL – to create what she describes as a “performance-based modular system.”

Presented at Track One – a multi-use venue originally constructed in 1924 by the Nashville Decatur Railroad, and now part of the revitalized Wedgewood-Houston arts district – “Haunted” will take audiences on an mysterious dreamlike journey, in which they will be able to explore various rooms and the ghostly characters that inhabit them.

“The goal has never been to retell the story in a literal sense,” Malone says. “That’s far too limited. We knew that in order to connect with audiences, to really let the experience get inside them, it had to be immersive. We wanted to shine a light, to give audience members room to explore, to be moved and hopefully motivated to think a little differently about history and our role in it.”

“It’s such an amazing opportunity to step beyond words and really respond to the space on an emotional level,” adds Rebekah Hampton Barger, Founder & Executive/Artistic Director of FALL. “We’re performing in what was a silo, so it’s dark and creepy, with no windows. But that atmosphere has really inspired our movement. I hope audiences will join us on this unusual journey, opening their hearts to this unique piece of local history.” 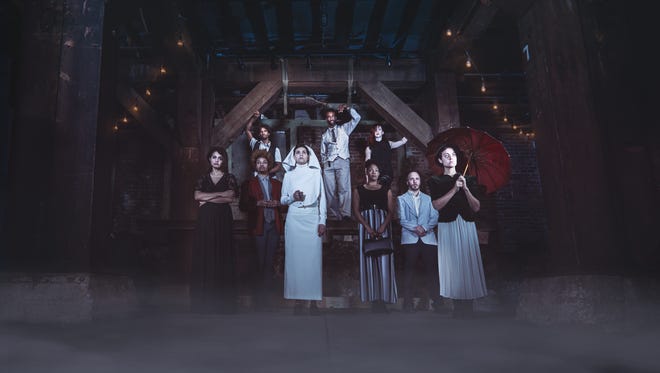