John Lewis has been arrested at least 45 times—and three previously buried records have now been unearthed (Get in the Way: The Journey of John Lewis ) By Erin Blakemore

Long before he was a U.S. Representative, John Lewis was a young man locked in a struggle for civil rights. But was he ever arrested during his years of protest? If you asked that question to Nashville officials last year, they would have told you those records did not exist. But the answer is now “yes,” reports the Associated Press’ Adam Beam, thanks to an attorney and historian who followed the trail to Lewis’ previously unseen arrest records.

When David Ewing began looking for evidence of Lewis’ arrests during the Civil Rights Movement, he was told that those records did not exist. But after repeated requests, officials from Nashville dug around in their archives and found evidence of three arrests between 1961 and 1963 for charges like resisting the peace, disorderly conduct and resisting arrest.

Lewis, who served as chair of the Student Nonviolent Coordinating Committee, recalls being arrested for a sit-in at a Woolworth’s counter in which he was hit. “The people heard that we had been arrested and before the end of the day, five hundred students made it into the downtown area to occupy other stores and restaurants. At the end of the day ninety-eight of us were in jail,” he said in an oral history. Lewis’ commitment to what he calls “good trouble” has had real consequences over the years. To date, he has racked up at least 45 arrests, most recently while protesting on behalf of comprehensive immigration reform in 2013.

The SNCC was famous for not just its non-violent actions, but for the training it gave its members on how to resist the status quo. In workshops organized by James Lawson, members like Lewis, who helped lead the lunch counter sit-ins, received training on how to withstand everything from armed assailants to the catcalls and public humiliation that accompanied their public actions. Many passive protestors were charged with disorderly conduct and hauled off to jail; in the case of the Woolworth counter sit-ins, new protestors took their place. Over 3,000 people were arrested during the Woolworth protests alone.

As Jessica Bliss reports for The Tennesseean, the records were apparently recovered when Nashville’s police chief pulled them for use in teaching new recruits. The last time he made a request for the records, Ewing, who had been searching for them for over a decade, was finally given access. They were presented to Lewis, whose autobiographical graphic novel series March has received critical acclaim, bestseller status and a recent National Book Award, in an emotional ceremony. Now they’ll be put on display inside Nashville’s Public Library—a reminder that though there’s always a price to pay for “good trouble,” it can inspire lasting change. 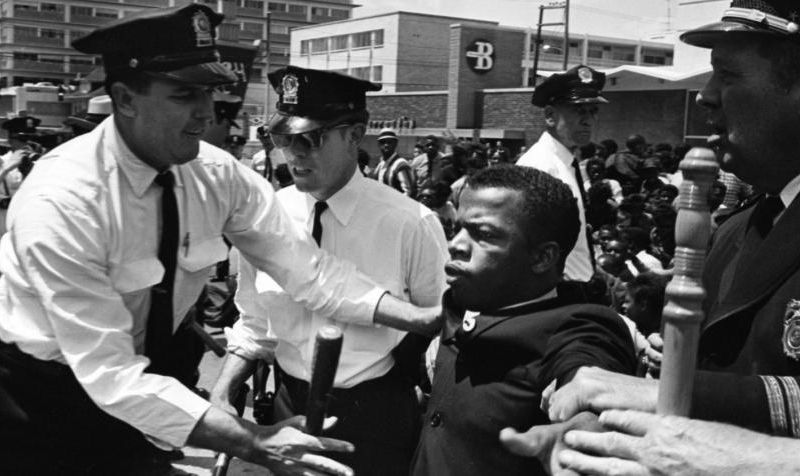